To talk about Hatteras Hammocks, you’ve really got to start with Mr. P.

That’s Walter R. Perkins Jr., to be a bit more formal, which we all are around here when it comes to him, mostly. You might say we’re kind of formally informal with him, mixing the respect he deserves with the energetic fun that quickly invades any room he walks into. So everyone at Hatteras calls him Mr. Perkins, or Mr. P., for short. That includes his own son, Walter R. Perkins III, the CEO of our 40-year-old family company.

Mr. Perkins’ enterprising spirit and “why not?” attitude is the thing that’s always catapulted this company forward. It’s what drives Hatteras Hammocks to this very day.

But where exactly to even begin with Mr. P.? Odds are you’ve never met a character quite like him, to be sure. “Colorful” doesn’t even begin to describe him!

Now in his 70s, Mr. P. is still like human electricity, not easily contained, and not good with being told no. Inform him he can’t do something he believes he can, and he’ll find a way to, rest assured! He’s simply not a man to sit still. The veteran hammock-maker has got to be up and doing, fiddling with things, creating new stuff, making the old stuff even better. Which is exactly how he ended up with a hugely successful family company on his hands before he even knew he was starting a business at all.

For years now, Hatteras Hammocks has been an industry leader in the production of high-end hammocks, hammock swings, hammock stands, swing stands and hammock accessories. The scrappy North Carolina company got there by staying true to Mr. Perkins’ simple but highly uncommon formula for success: Figure out how to do it right, and then do it even better still. Keep moving, keep making, keep improving. Mr. P. in a nutshell. 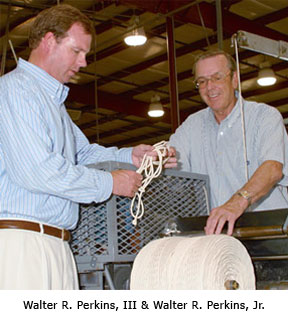 The Hatteras story begins back in 1971, when a young Mr. Perkins was a buyer for the American Tobacco Company, which had him traveling often, all throughout the Southeast. Before one particular work trip out to his beloved Carolina beaches, his mother asked him if he’d pick her up one of those rope hammocks like you’d see sold all along the coast. As soon as Mr. P. found her one, he knew he had to buy another for himself. An avid woodworker with a true inventor’s streak, he couldn’t resist the idea of taking it apart, putting it back together, figuring out what made it work.

But once Mr. P. had done all that, it got him to thinking: How can I make an even better hammock than this one? So he pulled together some raw materials, started tinkering around with the design, substituting stronger rope, for instance, and heavier, safer chain. He experimented with everything, wasting nothing – he even tried using old tobacco-curing sticks as an early wood source for his hammock spreader bars.

Before he knew it, Mr. P. was a bona fide hammock-maker.

He sold his early designs right out of the trunk of his old Toyota station wagon during later beach visits and work trips across the Southeast, up as far as Washington, D.C. “It was the perfect example of a hobby becoming a business,” Mr. P. has often said. And he’ll be the first to tell you that he really had no idea what he was getting himself into.

Soon enough, he couldn’t keep up with the demand for his handcrafted hammocks. Family members pitched in – Hatteras CEO Walter R. Perkins III, for one, grew up making hammocks right alongside his father. Company legend has it that a young Walter, every bit as much the tinkerer as his old man, first showed Mr. P. how to tie a ring knot.

“He sure did,” Mr. P. confirmed with a chuckle. “He tied it right on the rung of a chair.”

It wasn’t a fancy operation in those early days. After quickly outgrowing his own backyard woodshop, Mr. P. began handcrafting his hammocks in a second-story room above a gift shop in an old house in hometown Greenville, in eastern North Carolina. The gift-shop lady often chided him about making so much racket up there during business hours. By then Mr. P. had bought himself a van, so he could cart more hammocks around. As customer orders were completed, to keep from having to carry each hammock down a flight of stairs, he’d throw the things out the upstairs window onto a waiting mattress carefully positioned on the ground below. Every so often he’d have to go down and move the mattress a little.

By 1987, Hatteras Hammocks had blossomed into the world’s top hammock producer, known for its humble and storied beginnings, unmatched designs, innovative blending of handcrafting and state-of-the-art manufacturing processes, exceptional customer service and, yes, for plain and simply making one darn-fine hammock, and then always working to make the next one even better still. 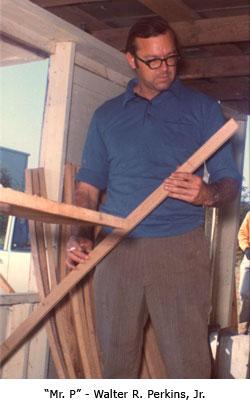